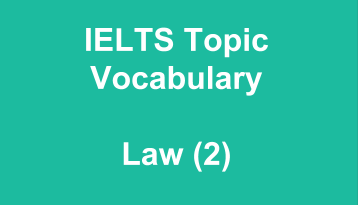 Small confines: The puppy was placed in small confines so he would not use the bathroom in his cage.

Cell blocks: The cell blocks of the prison held inmates of all shapes and sizes.

Brute force: We had to use brute force to open the rusty door.

1. How does Dan describe the conditions of the prison he visited and what were his first reactions and feelings to this environment?

2. How does the initial protocol of “contain and control” using the “hole” cause prisoners to become worse as opposed to making them better?

3. What are the consequences of meeting violence with force and chaos with chaos? Dan relates this tactic to putting out fire with fire.

4. What strategies did Dan’s team of officers apply in order to prevent violence and bad behavior in prisons?

5. How does Dan prove that prisons can help inmates live meaningful lives?

Video: Listen to the topic vocabulary in use

It is a common viewpoint in today’s society that someone who has been labeled as a criminal for committing illegal activity is unable to change his or her identity and will always be considered a criminal. Does this viewpoint align with yours? Support your argument with specific reasoning.

Many people in today’s society believe that criminals cannot change their identity and will remain criminals forever. However, there is reason to believe that this viewpoint is false. With increased ______ _______ between prisoners as well as officers, a ____ ___________ can be created in which prisoners can improve themselves and change who they are. This essay will discuss why it may be possible for criminals to abandon their past and live meaningful lives in their future.

For example, a recent study showed that when the _______ __________ interacted with prisoners before prison and again after prison, they could tell a positive difference in the prisoner’s demeanor. Therefore, it is possible for prisoners to change with the help of prison.

Secondly, people outside of prison have proven change is possible is everyday life and because criminals are human like everyone else, change is possible for them as well. Various prisons strive to make inmates’ lives more meaningful, because they believe in the power of change.

In conclusion, while some individuals in prison may not have the power to improve themselves, many criminals have gone through prison and proven that they can abandon their past and live meaningful lives.