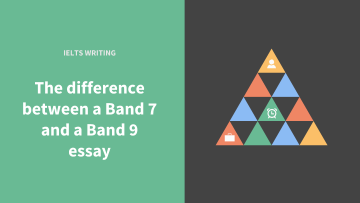 The difference between a band 7 and a band 9 essay

Firstly, it’s vital to understand the expectations of the examiner who will score your IELTS writing. There are clear differences in criteria that determine a Band 9 from a Band 7 essay. You can get an ex-IELTS examiner to review your essay here. Another option is the free IELTS writing evaluation software we recently launched.

A band 9 essay answers the essay question in full and offers a well-developed response. The essay is perfectly cohesive and paragraphed, uses a range of language, expression and accurate structure.

A band 7 essay aims to respond to the question although the answer could be more fully developed. It attempts a cohesive structure and logical flow but there may be some omissions of connectors.

A band 7 essay shows a sufficient scope of language with occasional redundancy, errors in word selection or minor grammatical mistakes.

Let’s take a look at two examples of the first paragraph of essays that respond to the same question of task 2 of the academic writing component of the IELTS exam. The first one scored in band 7:

In the introduction, the writer addresses the first part of the question but doesn’t respond to the second part regarding the poor taking responsibility for its own standard of living.

There is a punctuation error and some redundancy using the word but. In the second paragraph, the candidate provides a topic sentence and example. The example is quite vague – there is no reference to a specific train station or how rich people could give money to the poor. Instead of using a synonym, the writer uses the word money three times.

The second paragraph is slightly better as the example provided is specific. It refers to London and illustrates the contrast between the cost of living and purchasing power.

However, the errors in tense, wrong possessive adjective (his instead of their) and basic, repetitive language will keep the scoring of this essay to a 7.

Let’s turn now to an example of an essay that would have most likely scored a band 9:

plagued civilisation - collocation.
Whereas, - more advanced grammar structure.
“every man for himself” - correct use of idiomatic expression.
helping their neighbour - not exactly an idiomatic expression, but a stylistic way of referring to helping out others.
The following essay … - Signals to the examiner the direction we will take the essay.

-albeit under duress- a very sophisticated way of saying forced.
multiplier effect - collocation.

Each paragraph starts with a topic sentence that clearly defines the writer’s opinion and main ideas.

Complex adverb clauses – starting with Whereas and While – are well-structured.

Instead of repeating the word obliged, the writer uses synonyms such as required and have a duty to offer a variety of language. The examples in the first and second paragraphs are very specific and clearly develop the main idea.

Tutorials and Tips to Prepare for Task 2